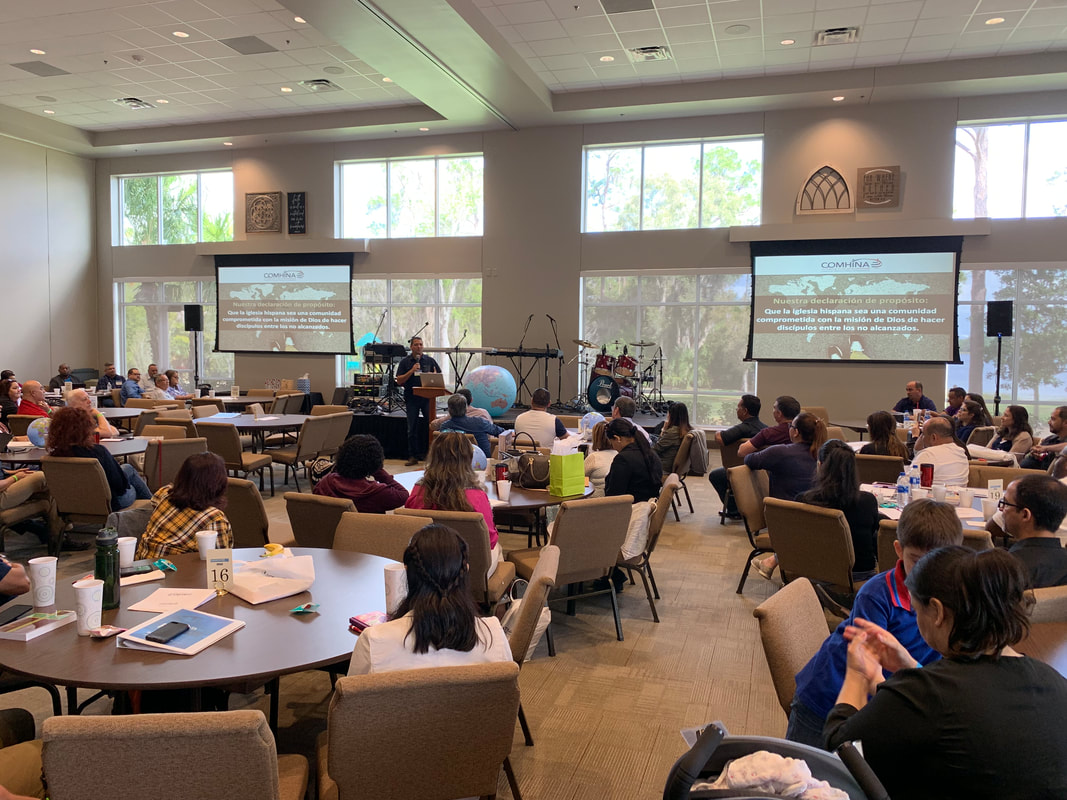 Iniciativa 21 of COMHINA, the North American arm of COMIBAM
This first quarter of 2019 is one with significant FIRSTS for PLAN panta ta Ethne as we come off the starting blocks. First, there have been the formulations of a Two-decade Plan, One-decade Plan and a Five-year Plan built upon and from results we gained through our sabbatical where we spent months crafting Ministry Statements and Contribution Goals extrapolated from a plethora of studies we did to determine our Personal Divine Design. Henceforth, we seek to orient ourselves in the next two decades around what we are now calling TARGET 6 /18 /54. We do not presume upon God that we will have two decades of ministry left in us, but we do ask Him to allow us all that is necessary in order to partner with the Latin American Church to recruit, train and deploy verifiable Latin American cross-cultural workers willing to engage Six Unengaged Muslim People Groups with the Gospel of Jesus [NOTE: an Unengaged People Group is an ethnicity sharing a common language, culture and sense of belonging that has ‘0’ Gospel believers among them, ‘0’ churches and ‘0’ global churches having adopted them in some way to engage them with the Gospel. Such peoples can also be called Abandoned or Forgotten. According to Vision 5:9 there are 1,005 identifiable Muslim Unengaged People Groups in the world]; Eighteen Unreached Muslim People Groups in like manner [an Unreached People Group is an ethnicity with no more than 2% believer and therefore unable to sustain a Gospel witness among their own people due to insufficient numbers; there are over 7,000 Unreached People Groups in the world today of which over 3000 are Muslim]; and finally to see the above happen by virtue of Fifty-four Latin American cross-cultural workers successfully mobilized to make a significant impact upon these six Unengaged and eighteen Unreached fields. Such Latin American workers might be individuals working on multicultural teams either through international or grass-roots mission agencies we work with, or better yet teams where every member is Latin American working through either a traditional mission agencies or church(es) dedicated to planting God’s Church with Kingdom-oriented works of Disciple-making initiatives. Such projections will necessitate innovative and creative strategies to say the least.

Our SECOND FIRST was the ‘coming out party’ so to speak for PLAN panta ta Ethne that took place February in Florida at the Iniciativa 21 conference (https://iniciativa21.org) where both Hispanics across the USA and Latin Americans up from both continents met together not only with workers from North Africa, the Middle East and Asia, but also denominational heads and pastors from across the North and South American continents exploring how the final remaining task of world evangelization to the Unengaged and Unreached might be achieved. It was good to see old friends and make new acquaintances that have already opened significant doors for PLAN panta ta Ethne. I was asked to sit on a panel at the conference as a representative of PLAN panta ta Ethne and was quite surprised by the response of Latin American workers interested to share with ears perceived as non-threatening, representing neither mission agency nor local church, yet another affirmation we head in a correct manner with our new focus. Clic here to see a portion of what’s on the horizon for us and PLANpte, in part impacted from this conference.

Our THIRD FIRST was our first report to our Accountability Council of our activities this year. We have connected with over a hundred new potential prayer and financial partners with challenges to them to consider making PLAN panta ta Ethne part of their Kingdom-building investment strategy. We have now successfully witnessed many of our precious supporters renew their commitment to us and God’s call upon our lives. We stand today with every single one of our prayer and financial partners from the past having now migrated over to PLAN panta ta Ethne with the exception of three… one we were unable to contact and two that sensed it was time to make a change in light of a new direction from God. Clic here for a fuller summary of our financial reality.

A FOURTH FIRST was the joy it was in March for me to hike 5.6 miles on an ankle that gave me no problem whatsoever. As a matter of fact, I hiked the last 2.8 miles in 54 minutes across up-and-down hills! God is so good to have granted me the opportunity to have an operation last year that went so well and is now becoming a distant memory.

Our FIFTH AND FINAL FIRST has been to finally come to a place in our service to the King after more than three decades of ministry where we sense an unopposed freedom to craft a member-care that is truly member-care for our lives, a medical plan that not only provides adequate international coverage with international repatriation in the event of emergency or death, but one also economically sane and finally, a retirement plan that works for us (we really do not think of ‘retirement’ as most think of it per se on account there is really little biblical precedent for such thinking, but choose rather to think of ‘later-year subsidies’ for those days ahead when we might be unable to preach, teach or write any longer). God has led us since September of last year to incredibly and frankly miraculously, address these important matters. Now we ask God that He provide the adequate funding we need in order to continue forward with these contingencies. For a fuller picture of our financial need that also includes the opportunities coming our way clic here.
Clic the Partner With Us button below to make Personal and/or Project contributions.
AOS is our financial provider; rest assured if you see PLAN panta ta Ethne (All Nations) at the top of the page you are at the correct donation page for the Green's ministry.